A design review meeting was held at Continental Fabricators in St Louis, Missouri on Tuesday January 24, 2017  Members of Mid Continent’s 1385 Task Force were in attendance as were Gary Bensman of Diversified Rail Services, Steve Roudebush from SPEC Machine, and Brett Morley of Performance Engineering. The meeting covered all of the details necessary to build the new boiler as well as provided a platform for everyone involved in the design process to review the fabrication plan with the team at Continental.  It was a very productive meeting with everyone having input into the planning of the new boiler and Continental coming away with some clear direction enabling them to proceed with the task at hand.

Action items to come out of this meeting include the development of Continental’s final production schedule. Fred Steinkuehler, Vice President of Plant Production at Continental is currently developing their schedule. He is basing the plan on Mid Continent’s detail drawings and expects to be finishing up within a few days. While the production department work out their timeline, the engineering department will continue the preparation of internal shop drawings. We expect Continental to be wrapping up their engineering phase over the course of the next few weeks.

With the boiler process well underway with Continental Fabricators, and the major parts of the running gear and cab near completion, the Task Force identified the many remaining accomplishments still needed. Completion times were assigned to each and a general schedule was outlined. It has been determined that, excluding any major unforeseen concerns, the 1385 can be returned to Mid-Continent next year (2018).  Timing can be determined more accurately as these projects move along.

At this juncture of the 1385 restoration, it was decided to forgo hosting an Open House this year. The many hours otherwise required by Mid-Continent volunteers and staff to organize and host the event will instead be spent toward expediting the completion of 1385. In place of the Open House, there will be additional volunteer work day opportunities during the year.

The Task Force is very enthused and motivated, and thanks everyone for their support.

The Chicago & North Western No. 1385 Open House, held February 20 and 21st, saw over a thousand visitors come through the SPEC Machine shop. Visitors were able to see up close the work that has been completed on the steam locomotive in the year since the previous open house event. 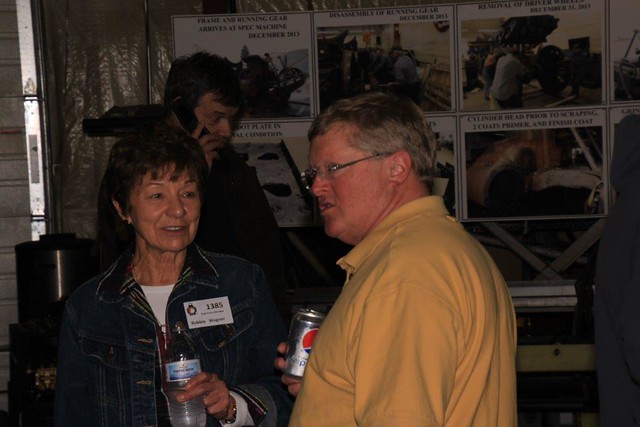 The C&NW 1385 Task Force would like to invite you to an open house to show you our latest accomplishments on the restoration of Mid-Continent Railway’s most prestigious locomotive.

There is no charge to visit the open house. Just bring your camera and your curiosity! Get caught up on the rebuild thus far via our Steam Status page.

For questions about the event, please contact Mid-Continent Railway Museum directly at 608-522-4261.

Mid-Continent Railway Museum has contracted with SPEC Machine to perform much of the restoration and rebuild work on the C&NW 1385. The open house is being held at SPEC Machine’s facility, just outside of Middleton, Wisconsin.

Two new high-quality videos have recently hit the internet following the 2015 C&NW 1385 Open House. Both feature video from the open house and interviews with key individuals involved with the project.

CNW 1385: On Track To Operation, One Year Later produced by Midwest Zephyr Media

Coverage of the event came in several forms. Several Madison-area news channels included the open house in their news coverage.

Stories appeared in both local and larger newspapers. The Wisconsin State Journal ran an article by Barry Adams in the Sunday newspaper a week in advance of the Open House. The same article also ran in other area newspapers, including the Green Bay Press Gazette.

The Wisconsin Southeastern Division of the National Model Railroad Association posted many nice photographs of the open house event on their Facebook page (does not require a Facebook account to view).

You’re invited to an open house showcasing the progress on Chicago & North Western No. 1385. Join us to see the latest accomplishments in person!

The open house takes place February 21-22nd at Spec Machine at 7175 Riles Road, Middleton, Wis. The hours are as follows:

We hope to see you there!